Can your regret make you happier & successful?

Regrets are that perceived action or choice which results in a bad outcome later on in life. It could be that broken relationship, financial loss or that game-changing career move that you never made. A regret is so much like a mistake – We learn from it, we get better, and we hope not to repeat it ever again. However, as we tend to be emotionally attached to the outcome associated to the regret, the pain is way bigger & hence it continue to haunt us for a long time, and in some cases, they follow us to our grave.

When we are born, we come with a clean slate. This was obvious, but for clarity, I wanted to ask around ten kids for their take on regret. I started off with my then 4-year-old son.

“Adi, do you have any regrets?”

He seemed to get the word in an instance and said: “No, it’s over.”

“Over?” I asked confusingly.

“Yes! Long time ago. Why you asking now?”

Then it flashed to me that he is talking of the vegan version of ‘No Regrets Cake’ we made sometime back and not the regrets I was after. I dropped my quizzing project instantly, but I continued my quest to understand it more and how to deal with some of the bigger regrets in a useful way.

We all were like my son when we were kids, but as we grow older, we had to make choices every day. The problem is that we give excessive importance to results and hence judge every step we take based on its outcome. However, not all choices we make give us instant results and hence there is no way for us to know if the decision we made is good or bad. And, when the results do not match our expectations, we beat ourselves for making a bad choice or not trying hard enough.

It all makes sense looking back. We remember all those people who asked us to make the ‘right choice’, the opportunities we had to ‘correct ourselves’ and why this is an unpardonable mistake. However, in most cases, when we make choices, we make the best choice at that time given the information available and our emotional intelligence at that time. If we roll the clock back and take out the information that we have now then it is most likely that you will make the same choice again. So, technically, for an analytical mind, regrets should not exist.

However, that’s not how the mind works. We have an instinctive drive in us to strive to get better and hence this increased sense of importance in things we don’t have but want to have. Hence, when we think that a choice or action of ours as the cause to miss out an opportunity of a certain value (need not always be measurable), its perceived value goes up significantly because it feels like you could have ‘had it by now’. We also regret those things which we acquire after certain effort but feel that the perceived value of the item is less than the effort spent to acquire it. This applies to anything from gadgets, education or even life partner.

We have a skewed perception of things where those we don’t have are seen as more valuable than those that we do.

How are we advised to deal with Regrets today?

For most of us, each regret is like a monkey on our back. Initially, it feels heavy, but as the time passes, we slowly get used to it. Stronger the regret, longer it takes to be ‘OK’ with it. Regardless of how ‘OK’ we are with it, a regret will never add value to us at any stage of life. If a mistake we make is like the flu, then a strong regret is like diabetes. It reduces our quality of life, and there is no good, positive way to deal with it.

My research partner Google showed me an elaborate step by step approach in dealing with regret. It talks about how we can list our regrets, learn our lessons and find ways to apply them and become better at dealing with regret. This is great advice on many tiny regrets (i.e. slightly more than a mistake), but for strong, intense regrets like breaking a long term relationship or a big financial loss, this approach doesn’t help beyond a point.

In an inspiring TED talk, I saw some time back, Kathryn Schulz provides an interesting take on Regret. She points out that it is impossible for sane people to ‘live without regrets’ and why instead of running away from our regrets, we should all embrace them. In her 16 minute talk, she hits the right chords with her powerful points and brings in a new way of thinking about a subject devoid of fresh perspectives. While I did like the talk, it left me wanting to find another, more positive perspective.

Can Regret be your weapon for success?

An intense regret evokes strong negative emotions. The best advice we have is to learn as much we can and find a way to make peace with it. However, as I was thinking, I got another perspective. The constant negative emotion generated by the regret is comparable to a never ending water stream. What we need is a propeller to generate electricity from it. Is it a crazy idea? Here is a story of Ty Bollinger which indicates it’s not.

Ty lost both is parents to the deadly disease of Cancer. He later realised that they died because the treatment given to them was not good enough. Loss of parents to wrong medical treatment could be one of the biggest regrets anyone can have, and I am sure it is something Ty will never be able to forget.

However, the inspiring part was that Ty, instead of weighed down by the regret, took it upon him to explore all effective alternative treatments available out there and present it to the world, a world hungry to know new ways to fight cancer. His work now has reached tens or millions of people, and I hope that at least a few thousands must have hugely benefited from it.

What caught me in Ty’s story* was the way he dealt with his regret. I am not sure what he was professionally before his parent’s death but the goals he set for himself based on the regret he had helped him to reach more people than he otherwise could. While he may never be able to overcome this regret of his, his success of reach millions and reciprocal appreciation from those positively impacted should provide a healing touch. Like most of us, he could have learnt to live with the regret, but he chose to use it to reach new heights.

I think Ty’s success was made easier by the purpose and passion born out his regrets of not being able to save his parents. There are not many who treat regrets like the way Ty did, but he is not alone. Marin Bromiley got inspired by the regret of loss of his wife Elane to fight medical negligence cover-ups in hospitals. His story inspired Mathew Syed to write the best-selling book ‘The Blackbox Thinking’ which compares what best practices airline industry which can be on-boarded by that medical profession.

Can Regret fuel your Purpose?

The above two stories should give a sense of what is possible. Both examples are to do with regret of not being able to save our loved ones but it is not hard to find people who have used their regret of loss of wealth to build more wealth second time around. So if the regret is too powerful, we can ride it instead of fighting it. We can make it our inspiration to aim for something far greater that we had ever thought of today. So we can make that really bad regret as our alley by defining one of our life’s purposes to be fuelled by it. And, as regret is always there at the back of our minds, just like the sun around the earth, we can use it as a ‘solar energy source of motivation’ to reach these seemingly impossible goals.

With this change in perspective, we would have converted energy sapping regrets into a powerful source of positive impact. We would have converted that big regret into our biggest weapon for success. However, not all regrets are cut out for this. From the above two examples, it is clear that the pain from the regret has to be strong enough to make us go the extra mile to stop everyone else from going through the same experience. 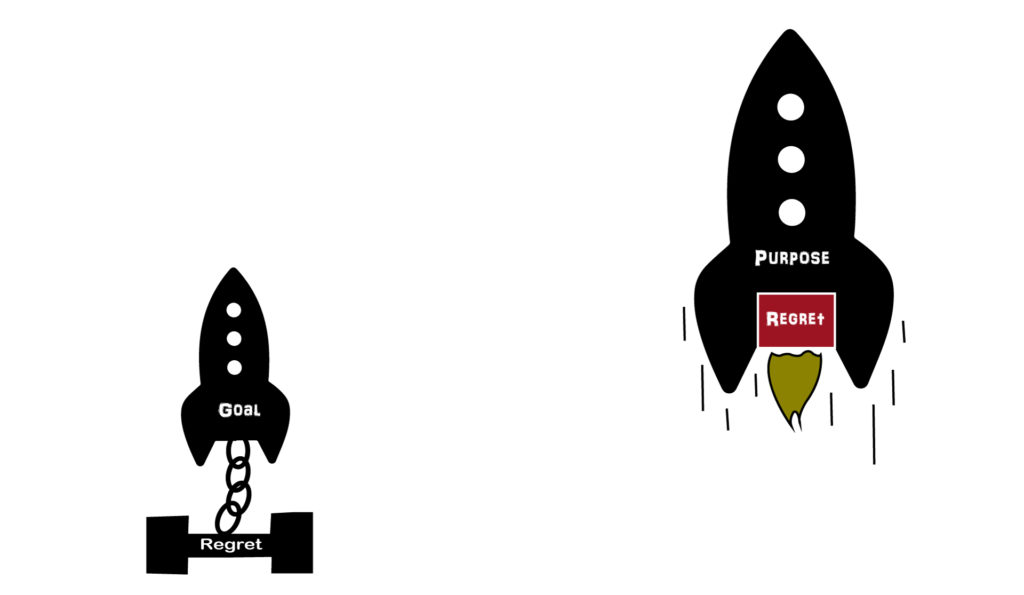 This approach is also not easy because it will require us to confront out regrets more often and hence life may feel more painful. However, if we can carve out a greater purpose like Ty’s or Martin’s, maybe years or decades down the line, the joy of helping many through our actions could start to supersedes the pain of the regret. This will also make you happier than what you could be without utilizing your regret. Sure, this is not for everyone or every regret that we have, but it is certainly an option to consider when that regret haunt you again. If not this, what better approach do we have to deal with those big bad regrets today?

* I don’t endorse or condone Ty’s view on what can and cannot cure Cancer, nor am I trying to promote his work. Cancer is a deadly disease, and those suffering may want to know everything out there before deciding the path they want to take. If you search his name, you will find both positive and negative views on what he does, and I let you decide for yourself. For the purpose of this article, I have assumed that Ty is a genuine person doing what he does with passion and purpose.

PrevPreviousWhy our pursuit of success is killing our happiness?
NextStory: Finding Your PassionNext

You have just created a book and want to create a video animation for it to promote it. The challenge is it is not easy.